A WALK IN GAMBASSI TERME: FROM DOOR TO DOOR 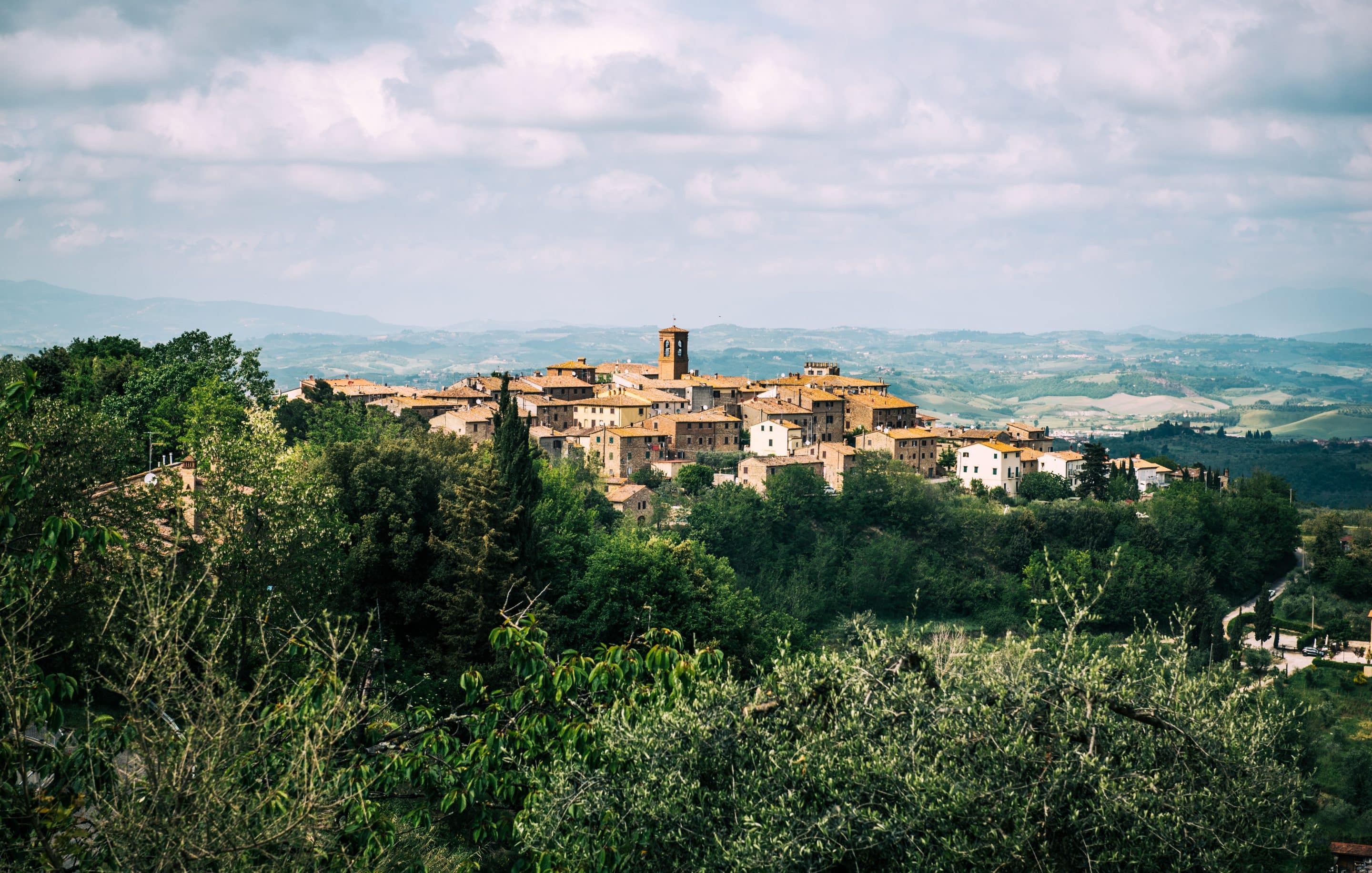 For those of you discovering new villages and hidden corners of Tuscany, here are our tips for a summer walk in the village of Gambassi Terme.

The slow time of Tuscan villages

In Tuscan villages like Gambassi Terme, that don’t live with the anxiety of continuous working hours, time slows down, life proceeds intermittently, whenever and for as long as the temperature permits.

You go out for an early morning coffee, have a chat in Piazza Roma, if it’s Tuesday you go to the fruit and vegetable market, otherwise there are the shops in the centre. In the back streets of the old castle, the scent of tomato sauce filters through the open windows and mixes with the smell of laundry.

You wind down the streets following the shadows cast by the tall buildings and medieval apartments, cooled by gusts of fresh air and the smell of musk coming from the open cellars. A few pilgrims slowly arrive, then in the afternoon everything stops, until you see children and grandparents playing and gathering outdoors. The plastic chairs are always ready, scattered in front of the house doors. You sit, observe, talk about this and that, watch people go by. From Via del Sole, San Gimignano peeps out, if the wind is blowing, while Membrino waves his banner, perched up there on the clock tower. 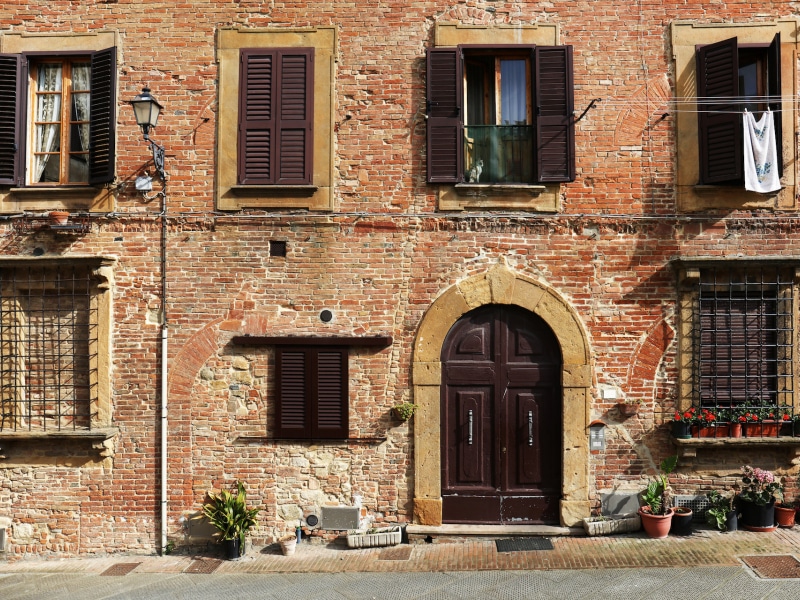 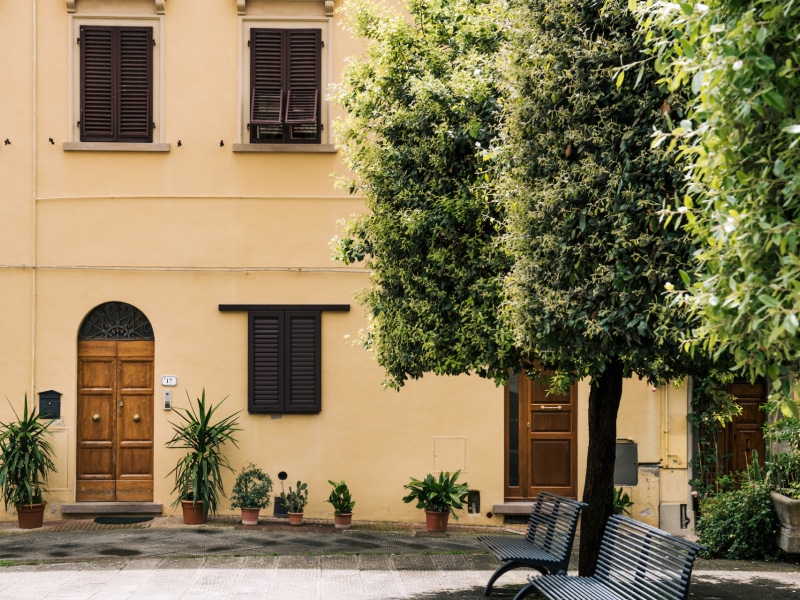 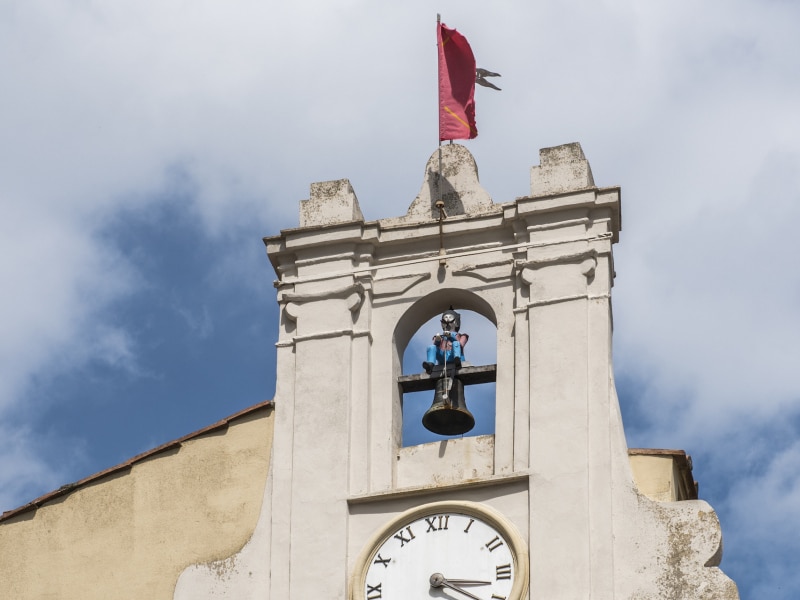 It looks like something from Intervallo, with Pietro Domenico Paradisi’s Toccata in A Major as the soundtrack. Sometimes you wonder how these picture-postcard scenes are still possible, when everything around you is hyper-accelerated…you wonder if it isn’t all one big Truman Show, and if you were born here, there comes a time when you have to leave…But there is a call, of the slow pace, of the relaxed village life, that sooner or later brings you back here.

In Gambassi Terme, in this village off the tourist maps, yet so close to everything – in less than 90 minutes you can get to Florence, Pisa, Siena and Lucca, or to the sea, which on sunny days can be glimpsed beyond the hills of the Val di Cecina – here, at 332 metres above sea level, there’s no need to pretend to be authentic, because this is how life really is.

So here are a few suggestions to make the most of a walk in Gambassi Terme!

From door to door

Raise your hand if you’ve never photographed a door, while travelling or just passing through.

Going from door to door, lingering in search of the best shot, the Wes Anderson-style shot, the right light…this is something many of us explorers have in common. We were doing it even before the doortrait – the door portrait – became a social phenomenon. We were doing it even before the camera, when portraying a door was never done by chance: a threshold, a boundary between the domestic and public worlds, as for the Flemish painters, or between reality and fantasy, as for Alice, who discovers her world of wonders by passing through one – an escape route.

A closed door makes us imagine what is hidden, an open door invites us to go through it.

This is why we begin our journey in Gambassi Terme talking about doors. 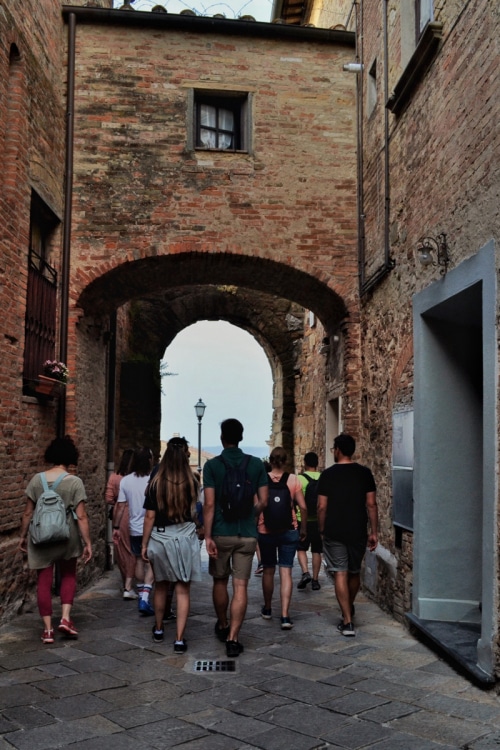 Porta a Chianni
We begin our walk in Gambassi Terme from Porta a Chianni – also known as Porta Fiorentina – which welcomes pilgrims walking along the Via Francigena. It is the northeastern threshold of the castrum novum, built in the 12th century. Little of its walls remain, although recognisable traces of the ancient castle are visible in the buildings between Via Gonnelli and Via delle Campane.

At the beginning of the 13th century, Tuscany was the scene of bitter struggles between districts. Gambassi was disputed between Volterra and San Gimignano, to which the village finally submitted in 1268. A few decades later the Florentines arrived and decreed its entry into the political orbit of Florence. Gambassi was a central and strategic junction, at the crossroads of the Via Volterrana – already travelled by the Etruscans on the Florence-Volterra axis and fundamental for the salt trade – and the Via Francigena, travelled by pilgrims, believers, merchants and goods. At the time, building on the hills was not for the view, but for defence against possible attacks and protection for the population of the entire countryside. 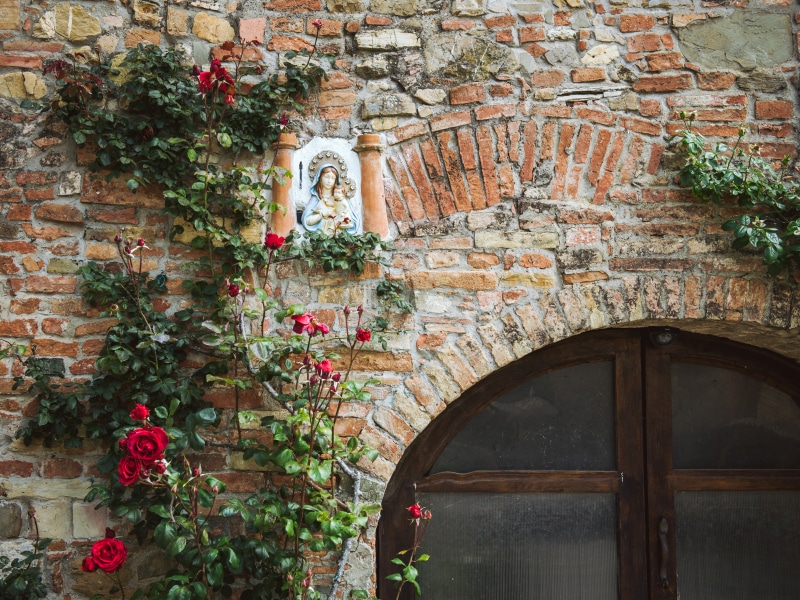 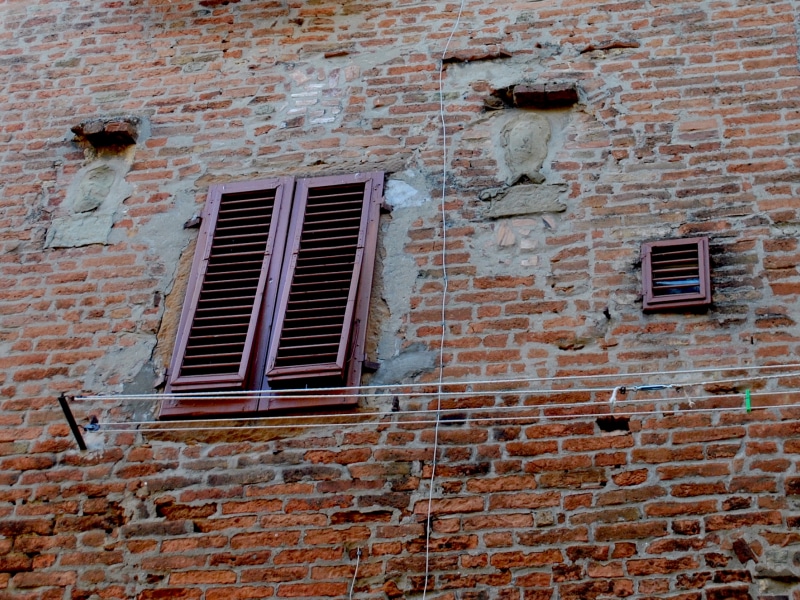 Doors of yesterday, doors of today

The castrum of Gambassi Terme maintains a temporal diversity that can be clearly seen in the façades of its buildings. The numerous architraves and arches of doors and windows that no longer exist tell us of other histories and eras, in a dialogue between past and present that you can almost hear. Traces that speak, if you know how to listen and observe, if you keep your head up, looking for evidence and clues.

In Via delle Campane, for example, opposite Vicolo dell’Oriolo, there is a modest brick façade. Its coffered door, framed by succulent plants, wooden stumps and flower pots hanging in the air, will draw your attention. In addition to this green orchestra, we recommend that you take a good look at the building: this is the old Palazzo Pretorio. Converted into a private residence in the 18th century, it still has two coats of arms on its façade. In the past, it was customary for each podestà to leave his coat of arms in memory of his office – the most exemplary case in the area is Palazzo Pretorio in Certaldo – and here we see two: the one on the left frames a rampant dog, the one on the right is divided by a diagonal band with three stars and eight rays. 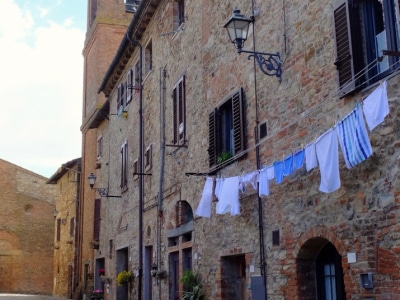 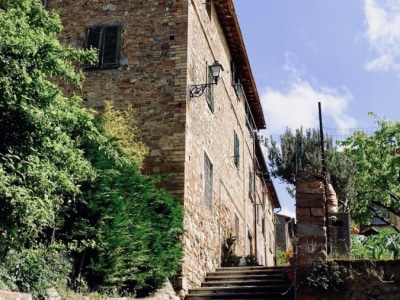 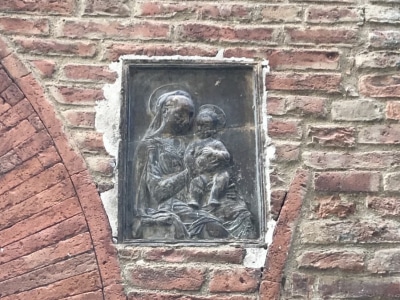 There are many of these aerial surprises, unexpected images embedded in the façades of the old town: we invite you to look for them, to stay alert. Try to find the votive image below, for example. It is a bronze relief, a copy of a Madonna and Child by Antonio Rossellino, a Florentine sculptor who knew how to draw with a chisel and perfect the art of relief painting, learned from Donatello.

Via delle Campane, number 6 is not the only flowery corner of Gambassi Terme. Walking through the streets of the historic centre, you will find other doors, other plants, other vases, offshoots of domestic spaces in the street. Our favourites, the ones we recommend for a snapshot, are in Piazza Castello and at the corner of Via Gonnelli and Vicolo del Giglio. Let’s start in the square, where you can’t help but be amazed by Signora Maria Luisa’s succulent plants. If you are lucky enough to meet her, chat with her, or find her looking out the window, ask her how she manages this small vertical forest. She will modestly tell you that they do it all. In truth, it cannot just be a question of good exposure. These plants are cared for with affection and passion… and it shows!

Another passion that we knew little about before we met him is that of Mr Franco, the owner of Casa Giulia, a door framed in yellow that opens uphill onto Vicolo del Giglio. The walls around the house are inhabited by strange green creatures: roots, branches and hanging balls that look like cocoons of earth and moss. These are small hanging sculptures: their real name is Kokedama. This is a Japanese tradition of plant cultivation, dating back to the 1600s, where the roots are sunk into the earth, then the plant grows suspended in the air. We had never heard of it…have you? 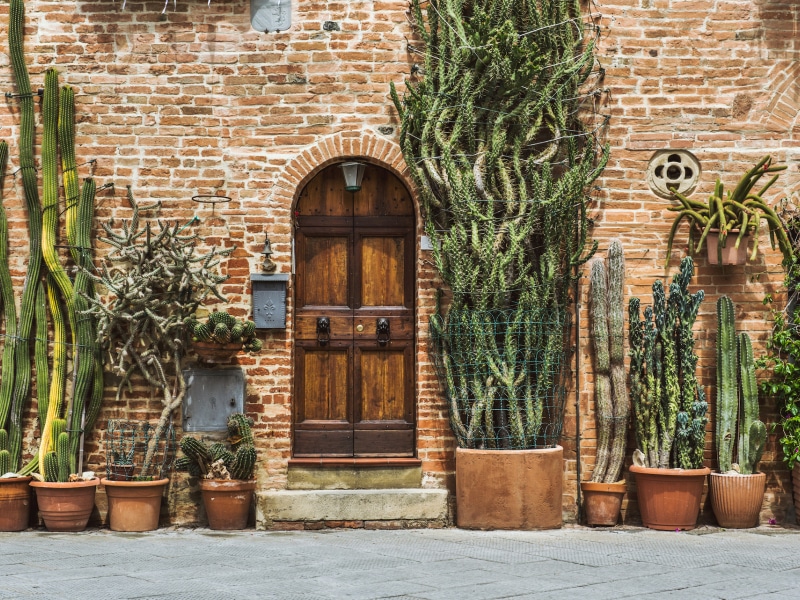 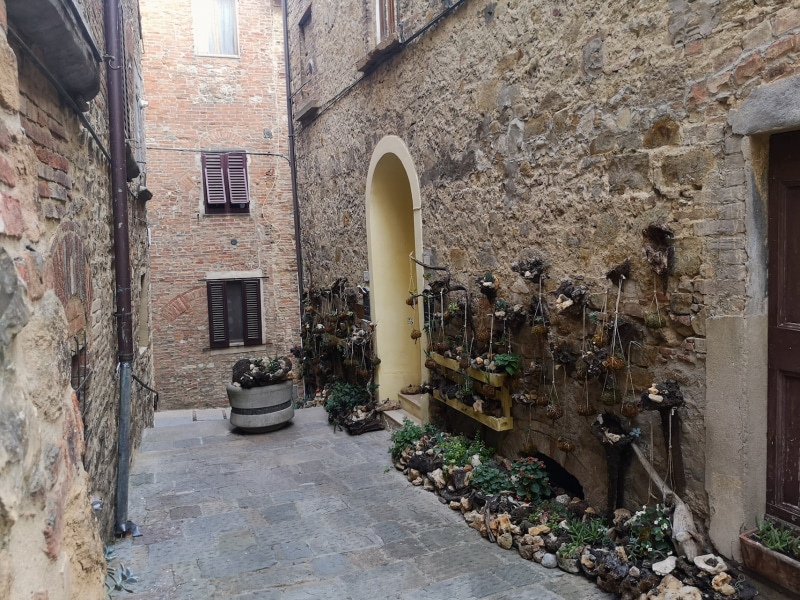 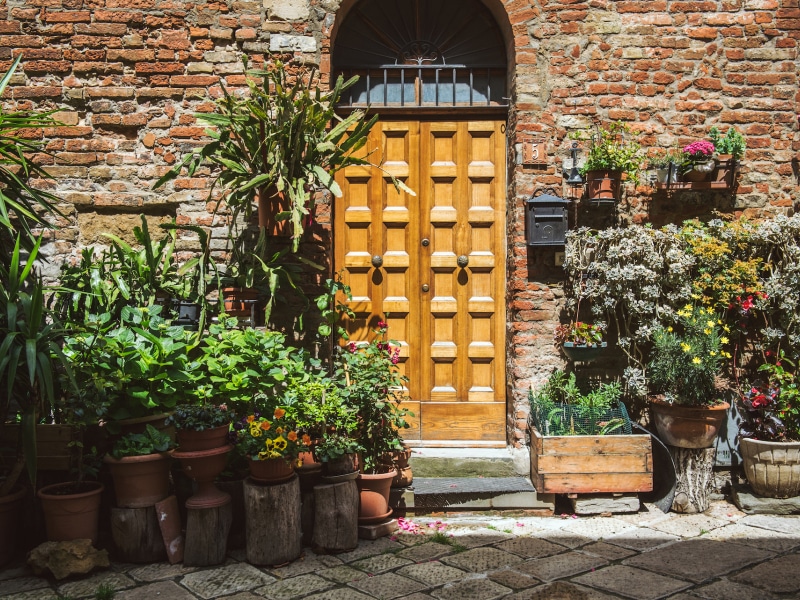 On what today is Piazza Roma, on the Volterra side of the ancient castrum, is the municipal garden, a surprising park for a town so small and so close to the open countryside. Yet there is so much life going on here: in the shade of the black pine, the locust tree, the majestic horse chestnut, the holm oaks and the cypresses, on spring afternoons and summer evenings, voices chase each other, children cry, teenagers love…From here you can enjoy an extraordinary panorama. We advise you to end your walk in Gambassi Terme at sunset, we suggest you wait for it, maybe stopping to drink a glass of wine in one of the bars in the square! 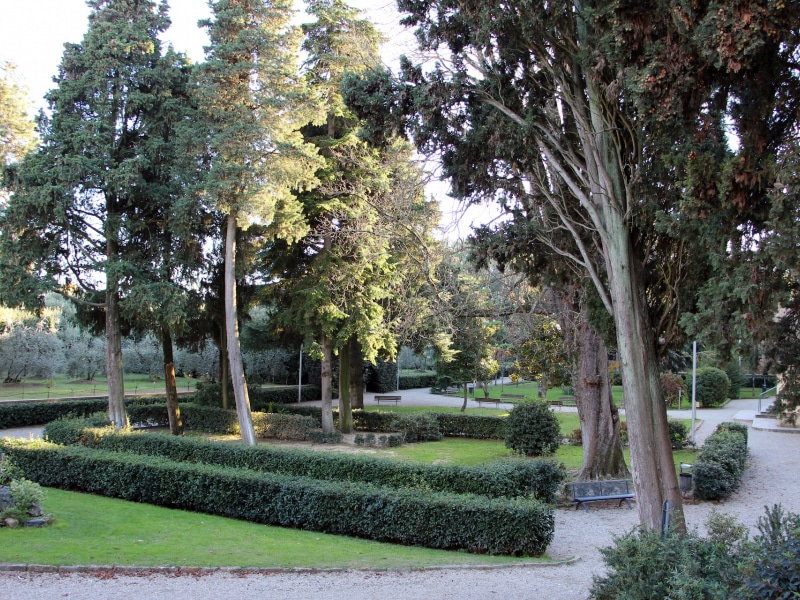 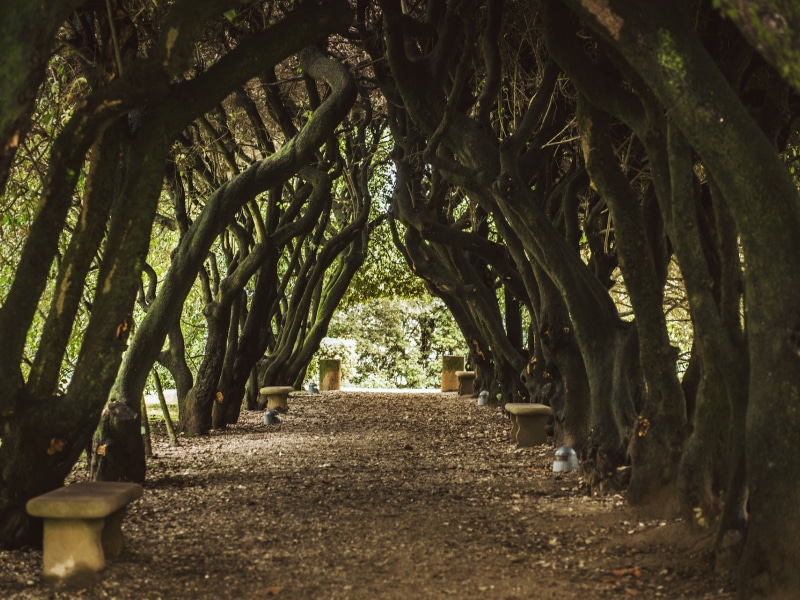 And now some useful information:

In Piazza Arfaioli, entering from Via del Teatro. This is the car park with direct access to the historic centre, just a short walk from Porta a Chianni.

In Piazza Giuseppe di Vittorio, in front of the Terme di Gambassi. On the way out, we remind you to pay attention to the ZTL – traffic restricted zone – in Via Garibaldi! It is active from Monday to Friday from 5pm to 6am, and all day at weekends. The alternative route out of the village is to go up Via Gramsci to the junction with Strada Provinciale Volterrana.

In the car park of Chiesa di Cristo Re – the Church of Cristo Re, with access from Via Volterrana. 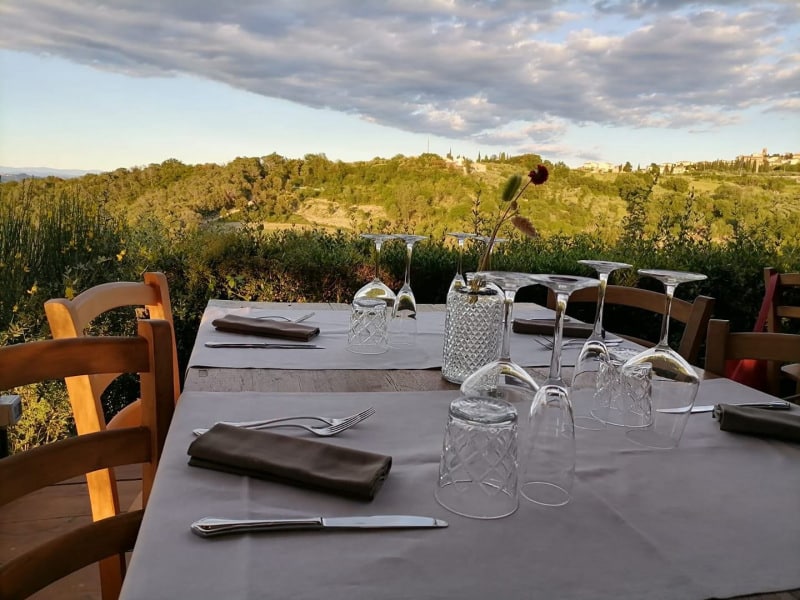 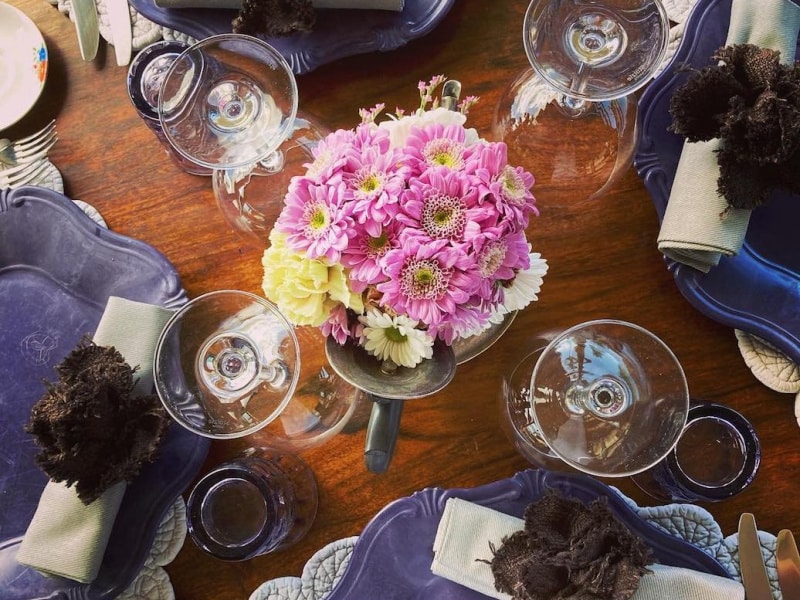 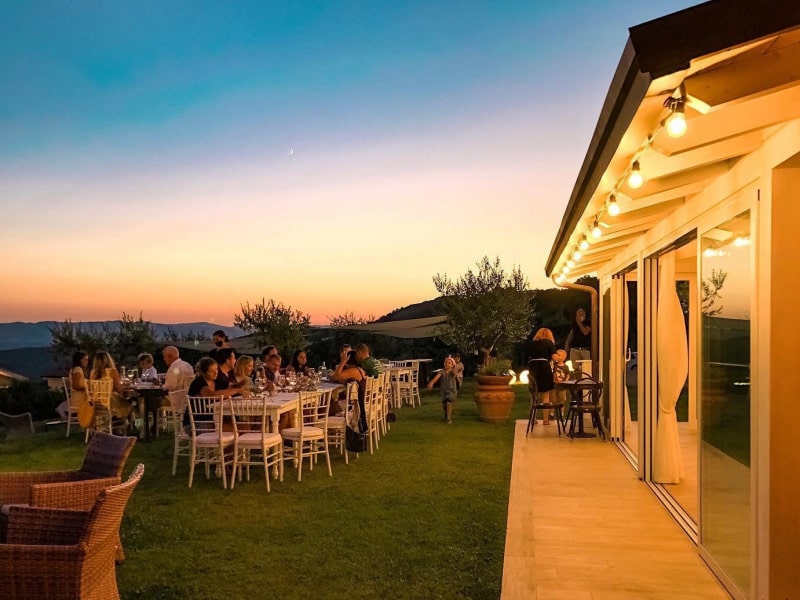 We recommend a detour in the countryside, to enjoy the fresh air of the hills even more! In ten minutes you can reach:

Nestled in the countryside and hosted by the agritourism of the same name, Trattoria San’Ilario offers fresh seasonal produce and dishes ranging from traditional Tuscan regional dishes – the classic Florentine steak, for example – to innovative culinary twists. In addition to the indoor restaurant, a covered pergola ensures a lovely evening in the safe outdoor air!

A decidedly unexpected place in this corner of the countryside, this is not your usual osteria with checked tablecloths: for years, Il Castagno has been managed and prepared with flair by Roberta Mazzaccheri and Massimo Farioli. In the kitchen, the chef Simona Gozzi is a recent finalist in the television contest Il Migliore Chef Italia – The Best Chef in Italy.

Bistro Stella is open for lunch, aperitifs and dinner and proposes traditional dishes, served by courteous and super-attentive staff. From the panoramic veranda and the garden you can enjoy a breathtaking view of Volterra and the Tuscan hills: the atmosphere is even more suggestive in the evening, when the light of the lanterns brings the adjacent olive grove to life.